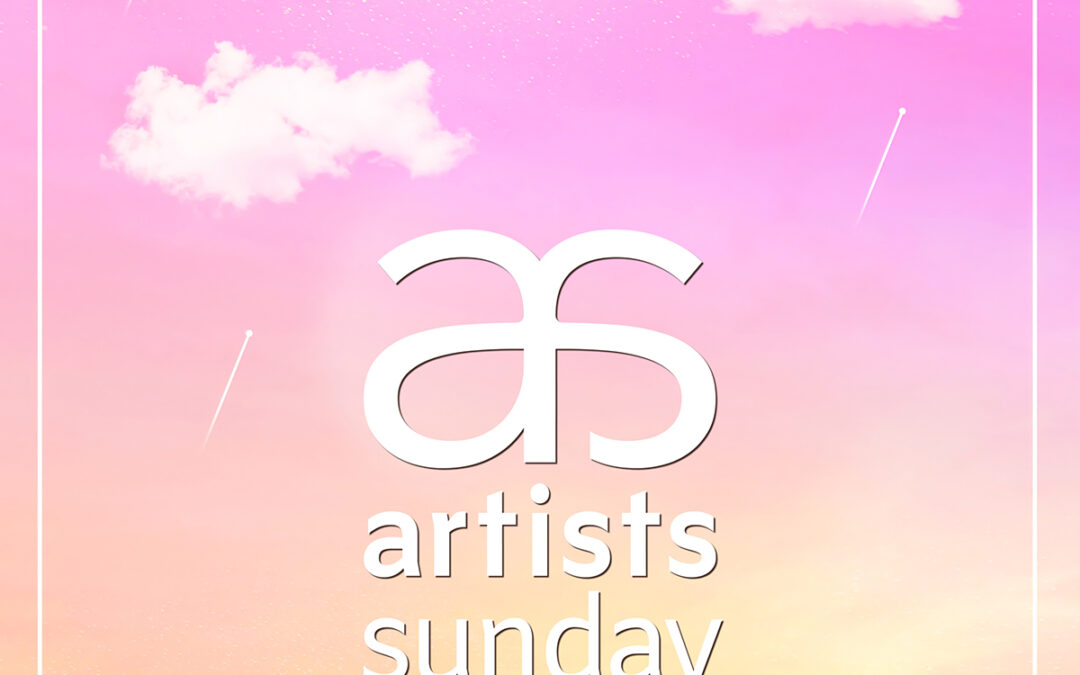 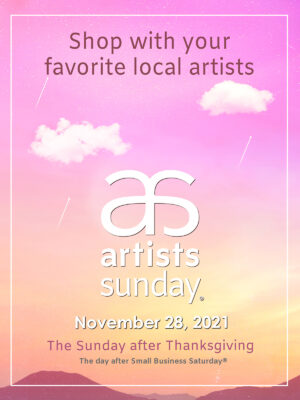 Sunday Nov 28, 2021 is Artists Sunday, a day set aside nationally to support US artists, including some authors.

Join me: support artists across the country, including authors, on Artists Sunday 2021, a nationwide event, the Sunday after Thanksgiving, November 28, 2020.

Help us encourage consumers to support artists, craftsmen and authors across the United States.

If you want to buy something special and unique this holiday season while supporting artists and authors, art and books this is a great place to look.

Look for Gypsies, Tramps and Weeia digital edition on Artists Sunday at an Artists Sunday special price (20 percent off). Instead of $4.99 it will be $3.99 from Wednesday November 24, 2021 to Wednesday December 1, 2021 on Amazon.

Need to save your pennies? Not in a shopping mood? That’s okay too. You can still support the idea by sharing the information with your family, friends and followers. 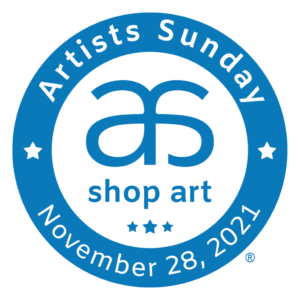 Elle is taking part in this year’s Artists Sunday, a marketing program and national event designed to support the work of artists, creators and makers during the holiday season. On Artists Sunday, November 28 2021, local communities come together and support their local artists.

Sunday Nov 29th is Artists Sunday, like Black Friday for art, including the work of some authors.

Join me: support artists across the country, including authors, on the first Artists Sunday, a nationwide event, the Sunday after Thanksgiving, November 29, 2020.

Buy something special and unique this holiday season while supporting artists and authors, art and books. 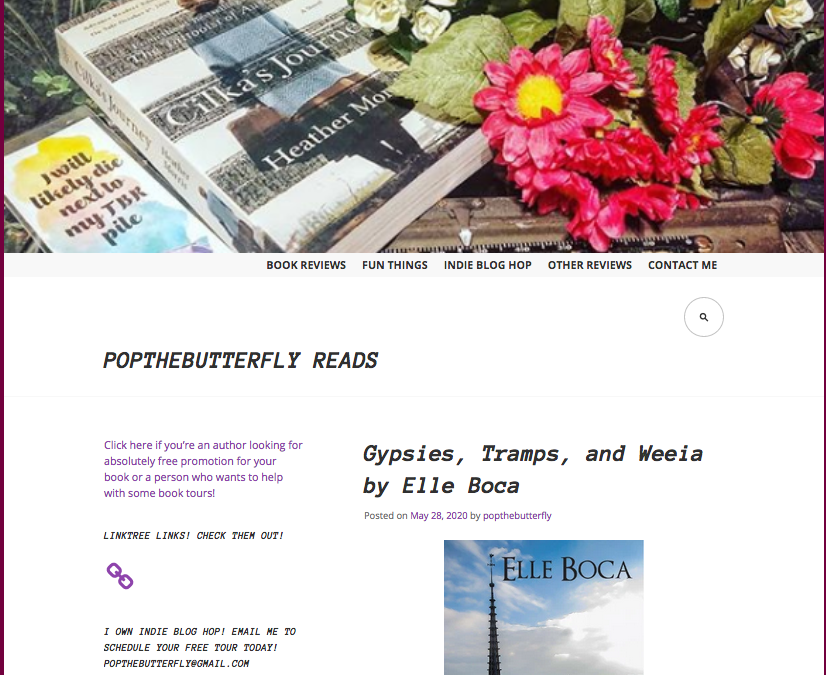 Gypsies, Tramps and Weeia on Pop the Butterfly

Paige is a book reviewer, a beta reader, an influencer, who runs Indie Blog Hop. See the profile on the Pop the Butterfly website at https://popthebutterfly.wordpress.com/2020/05/28/gypsies-tramps-and-weeia-by-elle-boca/ 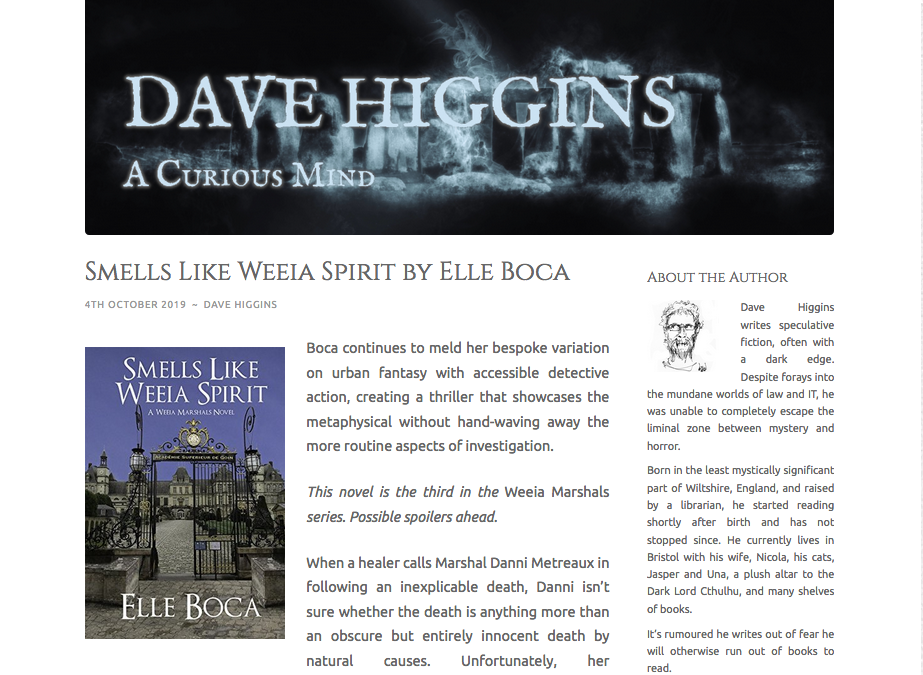 “A thriller that showcases the metaphysical,” reviewer says of Smells Like Weeia Spirit

Author David Higgins read and reviewed the third book in the Paris Marshals Series. Below, with his permission, is his review.

A pleasing mix of the two genres

Boca continues to meld her bespoke variation on urban fantasy with accessible detective action, creating a thriller that showcases the metaphysical without hand-waving away the more routine aspects of investigation.

This novel is the third in the Weeia Marshals series. Possible spoilers ahead.

When a healer calls Marshal Danni Metreaux in following an inexplicable death, Danni isn’t sure whether the death is anything more than an obscure but entirely innocent death by natural causes. Unfortunately, her investigation is stopped almost before it’s started when the headmistress of a Weeia private school demands the Marshals investigate a pupil’s misadventure. A situation made worse by the need for discretion with many pupils being the children of Weeia elite. A situation made worse still by Sebastien—Danni’s subordinate-cum-partner—being an alumnus.

As with the previous two volumes, this book is a police procedural with urban fantasy elements. Ironically perhaps, the presence of magic mostly serves to make the investigation more plausible rather than detract from the tropes of a police procedural; for instance, mystical perceptions justify the rather fast forensic turn around that features in many entirely mundane crime thrillers without removing the need to interpret the results.

However, there are also new techniques and obstacles caused by the existence of magic users; the book is therefore a pleasing mix of the two genres rather than a story that fits neither.

Unfortunately, Boca’s style is somewhat prone to detailed description and to through explanation. Although these bursts of exposition are usually the narrator’s memories being triggered by a location or event—so do not feel forced in merely to educate the reader—the presence of, for example, several long paragraphs on the taxonomy of Weeia power, between a character violently releasing power and the immediate impact of that release does weaken the building tension.

This style might also lead readers to misinterpret the extremes: so many asides containing information that can be useful to understand the world create the expectation that all the details are important, and thus disappointing readers who have tried to integrate, for example, the names of roads taken into a theory of plot; conversely, the presence of such detail creates an impression that the absence of detail is the absence of significance, disappointing readers who had incorrectly discarded a theory because some necessary item or behaviour was not mentioned until later.

Where these expositions do provide clear advantage is in accessibility: readers who either do not recall or have not read Boca’s other books will suffer no confusion.

These niggles of style aside, the plot has a pleasing level of complexity and is free from a sense that plot is driving character rather than the other way around. Thus, while readers might come to the wrong conclusions or curse the characters for not seeing a particular lead, there is neither a single inescapable answer that fits ongoing events nor a circumstance that is unfeasible even in hindsight.

Danni continues to be a sympathetic character, neither too passive in the face of obstacles to be engaging nor able to shrug off disaster without noticeable pause. Her continued ability to separate the better treatment Sebastien receives on account of his social position from his dedication to the Marshals, while still experiencing moments of displaced annoyance, in particular highlights this complexity of character.

The supporting cast are similarly nuanced, with returning characters acting consistently but displaying occasional deviations from the expected—positive and negative—when new circumstances arise.

Overall, I enjoyed this novel. I recommend it to readers seeking an urban fantasy detective story that focuses more on the investigation than the fantastical.

Dave Higgins, speculative fiction author
(see it and other reviews on his website at https://davidjhiggins.wordpress.com/2019/10/04/smells-like-weeia-spirit-by-elle-boca/)