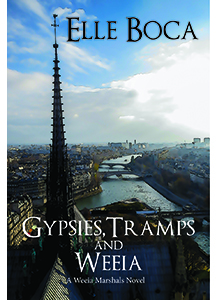 Noelle from the Rosie Amber review website read and reviewed Gypsies, Tramps and Weeia. With the website’s permission below is the review. Thank you Rosie Amber and Noelle!

Elle Boca is the prolific author of seven books about Weeia, and three in the Marshalls series, of which this is the first. Although I have not read the previous books, it was easy to immerse myself in this one.

The Weeia look like normal humans but they possess special powers for the sole purpose of protecting humans and Weeia alike. Their lifespan is longer than humans, but they are subject to the same dangers. Marshalls are trained to police Weeia hiding among humans.

At the opening of this story Danni Metraeux, who, while constantly bullied at the academy, completes her final exam and becomes a level 3 Marshall. The bullying is the result of something that happened to her family, but it’s not explained, so I was left wondering exactly what had marked her. Expecting to be given an assignment in a backwater place, Danni instead receives a plum assignment to Paris. Arriving there, she discovers why the assignment isn’t plum: her housing is less than substandard, her immediate superior isn’t interested in working with her, and her predecessors all died.

Nevertheless, Danni, who is strong, persistent and inventive, gradually overcomes all the negatives and finally – one her own – discovers a purpose for her being in Paris: to find a missing Weeia man in the underworld of gypsies and tramps who also populate the city.

The author does a good job of creating a three-dimensional protagonist with special powers and a whole host of tangential characters: a sort-of boyfriend named Ernie, who as second to the school’s Weapon Master, supplies her with the weapons she needs for her work; her BFF Marla, with whom she can share her troubles, both at school and in Paris; Odile Marmotte, an overly-made up matriarch who handles the day to day affairs of Weeia Marshals and is largely dismissive of Danni until Danni stands up to her; and the handsome Alain, who takes her on a tour of Paris on a motorbike, introducing her to the city. Of course, there is also Paris, and the author makes the city real and immediate.

In Paris, Danni comes into her own, as her growing powers allow her to be successful. I did like the paranormal aspects of the Weeia and enjoyed this world the author created.

There were a few issues for me, in addition to wondering about Danni’s parents. The pacing of the book was somewhat uneven. The testing of new marshals at the beginning started the book at a good pace but was followed by a lot of background information slowing the story. The tempo finally picked up around the middle of the book. The author does a great job with action scenes – I just wish there were more of them!

This book will definitely appeal to readers interested in the colorful world of a paranormal race, and there are two more books in this series.

Rosie Amber reviews “nearly all the books that I read, and post to Goodreads and Amazon US and UK.” Aside from her blog, she posts reviews on Facebook and Twitter and does 90 second YouTube book reviews. Read the original review at https://rosieamber.wordpress.com/2018/06/04/rosies-bookreview-team-rbrt-urbanfantasy-gypsies-tramps-and-weeia-by-elleboca/comment-page