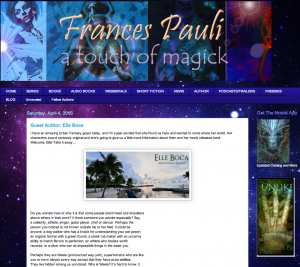 Author Frances Pauli invited Elle to submit a guest post about the Weeia to her website. It was published recently. With her permission below is a screen capture of it. Thank you, Frances!

Frances writing is speculative, full of the fantastic, and often romantic at its core with in a little humor whenever possible. The former visual artist enjoys crochet, belly dance and ukulele playing. She lives in Central Washington State with her husband, two children, a pair of hairless dogs and five tarantulas. To read Elle’s guest post and learn more about Frances and her books visit http://francespauli.com 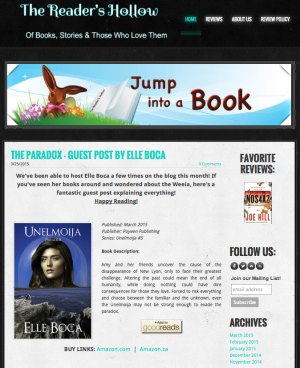 Erin, host of The Readers Hollow.com and a country girl who grew up around livestock, prairie winds and fascinatingly unique people, featured Unelmoija: Paradox, and a guest post by yours truly. Below, with her permission, is a screen capture of the feature. Thank you Erin! 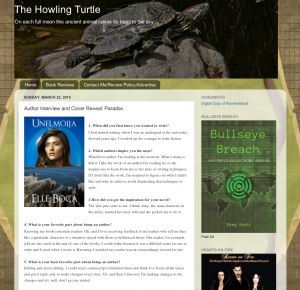 Larissa, host of The Howling Turtle, recently featured a Paradox cover reveal and an interview with me. Thank you, Larissa!

Larissa, who says books have been a passion of hers her whole life, was four when she told her mother she wanted to be a bookworm when she grew up. Convinced stories have the power to change and touch us in a way few things can, she shares book and author news on her site. To see the interview and cover reveal, and visit her site go to http://howlingturtle-pdx.blogspot.com/2015/03/author-interview-and-cover-reveal.html 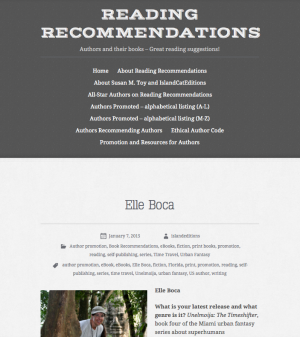 On her website Reading Recommendations Susan M. Toy, an author herself, promotes traditionally and self-published authors and their work in print and eBooks.

She recently selected Elle’s work for a feature. Below is a copy, with her permission.

What is your latest release and what genre is it? Unelmoija: The Timeshifter, book four of the Miami urban fantasy series about superhumans

Quick description: Amy’s past is catching up with her in a way that could only happen to a Weeia. She is drifting in her own timeline and must be careful not to change anything or she may never find her way to a familiar present. Even routine activities like fixing dinner or speedwalking with Duncan are becoming challenges. Will she and her friends solve the mystery in time for Amy to realize her ultimate destiny? 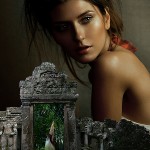 Elle is the author of the Weeia urban fantasy series set in Miami, Florida in the United States (based on a four county area of real life South Florida). Growing up the only child of a monkey mother and a rabbit father she learned to keep herself entertained and spend time reading.

Elle makes her home with her king cat husband in South Florida. When not writing and creating fantastical beings she likes photographing nature and wildlife, eating baked goods, watching movies, and dreaming of going on safari.

What are you working on now?

The Girl by Madhuri Blaylock

Reader wonders if we are all special and unique

In December 18, 2014, after reading Unelmoija: The Mindreader, Anne Marvin, who writes her opinions about fantasy fiction at TruthinFantasy.com, was inspired to write a post. In it, she explores some of the ideas from the book, especially the concept of Weeia as superhumans living hidden among humans.

I especially appreciated her words of praise about Unelmoija: The Mindreader: “Ms. Boca has created a very interesting world and I’m enjoying the unfolding of the story and the development of the characters.” Thank you, Anne!

With her permission here’s a copy:

I’ve just finished the second book in Elle Boca’s intriguing Unelmoija series, The Mindshifter. Ms. Boca has created a very interesting world and I’m enjoying the unfolding of the story and the development of the characters. As always, my favorite parts of the book involve the deeper themes I’m inspired to contemplate, in this case a variation on the Harry Potter syndrome: the idea that one day we could wake up and find out that we aren’t who we thought we were and that our whole reality has been turned on its head. What would that mean for us? How would we react? And what aspects of our character determine the direction we take upon learning that we are, in fact, more than we feared, and maybe even as much as we’d secretly hoped?

In Ms. Boca’s world, there are individuals go through life not realizing the truth of their identity, and then find out as young adults about their special status as part of the Weeia race. I don’t know about you, but I would have given almost anything to learn that I was extraordinary (in a literal way) when I was growing up (and maybe even after I was grown up). Doesn’t everyone secretly, or not so secretly, yearn to discover how and why he or she is special or unique? Don’t we all want to be exceptional? How great would it be to find out that instead of being Joe Sixpack or Jane Winespritzer, we were actually part of an exclusive club of superhumans?

This situation is similar to a common theme of childhood, one that I remember pondering a great deal when I was young: What if my parents weren’t really my parents and I found out that I was secretly switched at birth and I wasn’t who I thought I was? What if I were really a princess, or a queen, or a fairy (and yes, I had a very active imagination and spent way too much time reading). This would explain, to my childish way of thinking, why I felt so out of place in my family. It would explain my feelings of exclusion and difference. And, as an added bonus, it would also mean that my mother, with whom, as you know, I had such a difficult relationship, wasn’t really my mother. Which was good news in my book. It would have also meant that my beloved father wasn’t related to me, either, but in true kid-like fashion, I tended to gloss over that part of the logical sequence.

Not only that, but if we woke up one day and someone told us we were part of a secret world, it would clarify so many baffling facts—well, at least for me, but maybe you all are more normal than I am. Instead of feeling like a freak or someone who sees life from the outside in, as I did for so many years, especially from my early teens into my late twenties, I could think of myself as part of an ultra-covert, super cool, in-crowd of people like me who I didn’t even know about, but with whom I now belonged.

And if that were true, then I would also be able to validate my secretly-nurtured, barely acknowledged and rarely shared conviction that I really am singular and extraordinary and worthy. That all the rejection and dejection I’ve experienced was just the necessary tempering of the metal to make it stronger before it emerges into the world ready to fulfill its function. Wouldn’t that be something?

And as I write this I realize anew how much I used to yearn for the kind of legitimization that anonymous Weeia in Ms. Boca’s world received upon learning of their previously unknown heritage in the Unelmoija world. I so wanted something or someone outside of myself to tell me that I was more than I feared I was. But here is where truth and fantasy diverge. Beyond the fact that no one in the real world is going to tell us that we are members of a secret race of superhumans (beyond White Supremacists, or other misguided haters, of course), we don’t, in fact, need that to happen.

We are all special and unique and valuable. By virtue of being garden-variety humans, rather than a superhumans, we are part of the club, a member of the in-group. We all get to participate in the privileges and responsibilities of being human. Just plain human. That we don’t feel this way is a tragedy of epic proportions, generated by incompetent parenting as well as the constant comparisons we make about ourselves while being forced to watch artificially enhanced people pretend to be perfect on TV, in the movies and on social media. Sadly, as we strive for a perfection that doesn’t exist in reality, we enter a vicious cycle of inadequacy and self-hatred, leading back to our secret desire to get a letter from Hogwarts telling us that our lives to date have been just the warm up—that the real thing is starting soon, and it will be so much more, so much better than what we have. 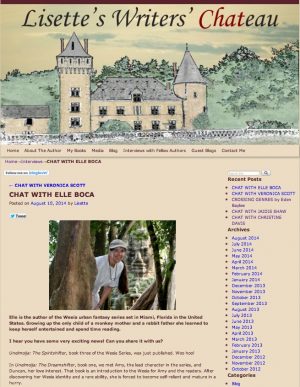 Lisette Brodey, author of Molly Hacker Is Too Picky!,  interviewed Elle about writing a series, her current book projects and life in general. Lisette writes strong, character-driven novels, with humor, centering on the lives of flawed human beings, in tragic and funny situations. Her other novels are Crooked Moon; Squalor, New Mexico, and Mystical High, the first book in her YA paranormal trilogy, The Desert Series. Look for Desert Star, the second book in The Desert Series, soon.