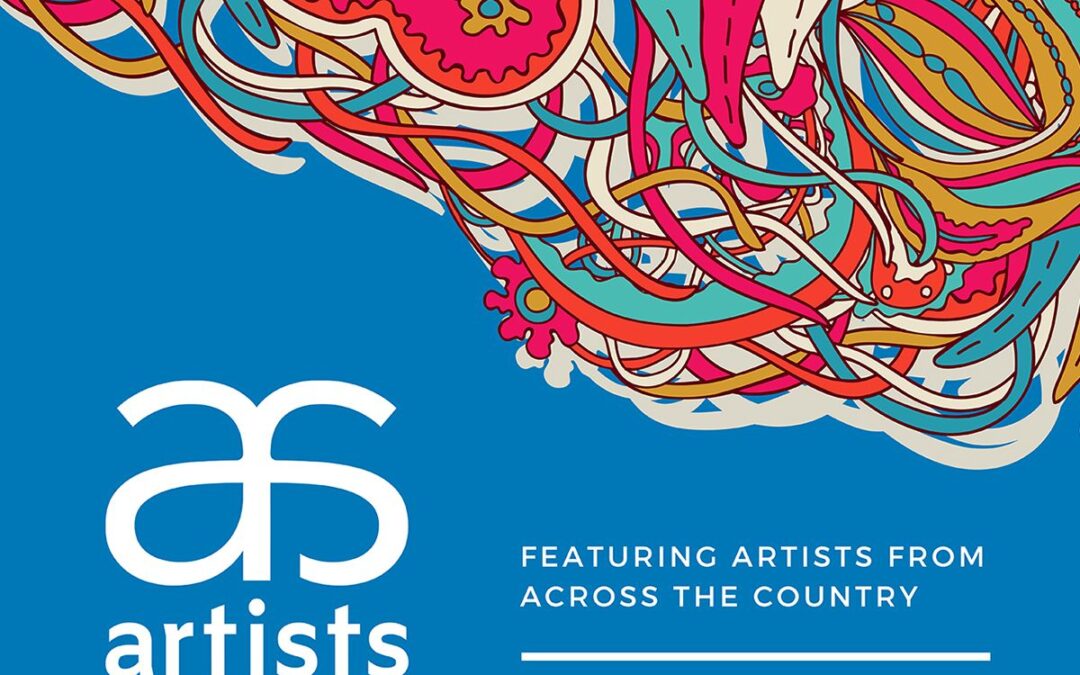 Join me for Artists Sunday Nov 29 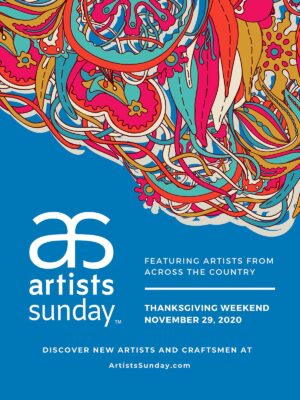 For Artists Sunday Nov 29th. It’s like Black Friday for art, including the work of some authors.

I’ve joined artists, including some authors, across the country for the first annual Artists Sunday, a nationwide event, the Sunday after Thanksgiving, November 29, 2020.

Buy yourself something special and unique this holiday season or gift a new book or artwork to someone in your life. By shopping through Artists Sunday you’re also supporting artists and authors, art and books, some of the things you love.

Next month I will announce how I’m participating in Artists Sunday. Look for an email, check the Updates on my website or follow me on Twitter. 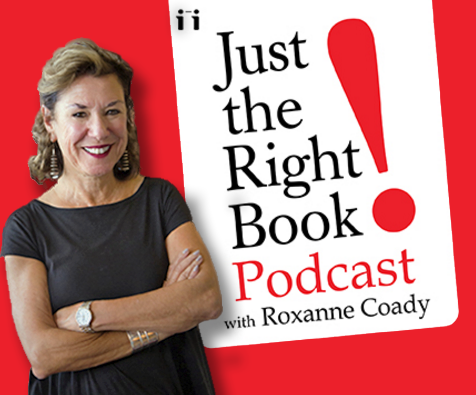 Vote for your favorite indie title

If you are reading this post you must like indie books. I’m sharing it to help spread the word about independent authors and publishers. I hope you will too.

For the first time, the podcast program Just the Right Book will mention an indie book. After a two week period of submissions in November, the program announced readers may vote for their favorite book from among 23 submissions, including Gypsies, Tramps and Weeia.

On December 15, the book with the most votes should receive exposure in an upcoming episode. See complete list below.

A spokesperson for the program explained, “we’re going to have a segment on a future episode with Roxanne talking about the winning book for a given amount of time, but I assure you it’ll be prominent within the episode. Depending on Roxanne’s schedule that day, we may also call the author to speak on the book a bit, but we couldn’t promise that officially as part of the “shout-out” because of her busy schedule around this time of year and some other factors. We also can’t give out stats on our number of listeners, sorry!”

The podcast is hosted by Roxanne Coady, owner of independent bookstore RJ Julia Booksellers in Madison, Connecticut. Cast your vote by midnight December 14, 2017 for Gypsies, Tramps and Weeia (or any indie title from the list below) at http://bookpodcast.com/poll

“American St. Nick” by Peter Lion
“Booth” by Jason Pellegrini
“Chokecherry Canyon” by Mike Attebery
“Death by Diploma” by Kelley Kaye
“First Case Scenario” by Annemarie DeClark
“Gypsies, Tramps and Weeia” by Elle Boca
“#MeBeingMe” by Challa L. Fletcher
“My Movie Memoir Screenplay Novel” by Betts Keating
“Occupying Aging: Delights, Disabilities and Daily Life” by Katherine Schneider
“On The Edge of Dangerous Things” by Suzanne Snyder-Carroll
“Saving Our Lives: Volume One — Essays to Inspire the Writer in You” by D. Margaret Hoffman
“Scapegoat” by Emilio Corsetti III
“Seven Birds” by Amy Sargent Swank
“Sid Sanford Lives!” by Daniel Ford
“Smothered” by M.C. Hall
“The Christmas Letter” by Steven H. Berman
“The Devil in Black Creek” by D.R. Bartlette
“The Devil’s Kettle” by Jeffrey J. Ollman
“The Kid in Me: A Personal Account of My Teen Pregnancy” by Margaret Thayer Paige
“The Salome Effect” by James Sajo
“The Sixth Event” by Kristen Morie-Osisek
“Threadwalkers” by Joanna Volavka
“Why Can’t We Just Play? What I Did When I Realized My Kids Were Way Too Busy” by Pam Lobley 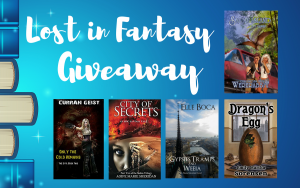 One lucky winner will take home five books, including print copies of two books, Only the Cold Remains by Curran Geist and Gypsies, Tramps and Weeia by Elle Boca in the TotallyAddictedtoBooks.com Lost in Fantasy Giveaway. The giveaway also features digital copies of Snow Island by M.Y. Zeman, Dragon’s Egg by Emily Martha Sorensen, and City of Secrets by Aoife Marie Sheridan.

On August 20, 2016 Whispering Stories, a United Kingdom book review website, published a Guest Post about Weeia by Elle Boca, including a spotlight on Gypsies, Tramps and Weeia.  Below is a copy of the post. Thank you Stacey!

Weeia, the Superhumans among us by Elle Boca – Guest Post

Gypsies, Tramps and Weeia
Sworn to protect the secrets of their race, marshals are trained to police Weeia hiding among humans.

After completing her advanced marshal training, Danni is blown away by her new plum assignment to Paris. But, all is not well in the City of Lights; the offices are a shambles, her boss is apathetic, and her predecessors died under mysterious circumstances; it’s almost like somebody doesn’t want the law there. Despite that she risks her life in the seedy underworld of gypsies and tramps to search for a missing Weeia man.

Weeia, the superhumans among us

Have you ever wondered how it is that some people stand head and shoulders above others in their work? Maybe you admire a celebrity singer, guitar player, chef or dancer. Perhaps the person you noticed is not known outside his or her field of expertise. It could be anyone, a dog walker who has a knack for understanding what’s going on with your pet pooch; a color adviser at the hardware store able to match any color to perfection; a dive master who can do things in the water you thought impossible; or maybe an athlete who breaks world records.

The Weeia (pronounced way-yah) are like you or me in almost every way except that they have superhuman abilities. They live hidden among us unnoticed. It could be your neighbor, banker, boss or doctor, even a person you’ve known all your life. Chances are they’re not because most of them live in secluded neighborhoods or small towns.

From time to time a few Weeia choose to live with people, usually in big cities where they’re most likely to blend in with the crowds. The abilities of Weeia among us are always explained away. They look like us; they hurt and bleed like we do. Test their DNA. Go ahead. You won’t find anything extraordinary.

Their super abilities vary by type and strength. They fall into four main categories: Emotional, Material, Mental, and Temporal. Weeia, it’s the same word for one or many, can be Lowes, Medius or Maximus depending on how strong an ability they have. Lowes is the most common which might explain how extraordinary beings have lived on the same planet with ordinary ones for a long time without anyone, or hardly anyone, discovering their existence.

There are multitude abilities among the Weeia, some common and some rare. For example, there are Weeia who can move so quickly no one sees them. Others heal very fast. Some can read people’s thoughts; pick up impressions from inanimate objects; or move things with their mind. There are those who have the ability to influence people and issue commands that must obeyed without fail. Rare Weeia control reality through dreams or travel in time.

How can you tell if someone is Weeia? You can’t. Because so few Weeia exist among billions of humans they protect their identity fiercely. Weeia’s most sacred law forbids revealing their existence or abilities to humans on penalty of death, to Weeia and human.

Weeia abilities first manifest in young adults. Something strange is happening and the most recent generation is not developing abilities the way they should.

Amy McKnight is an exception. Raised as a human, she discovers her true Weeia nature without warning or preparation. She’s a quick study, but her life is turned around when she begins having odd dreams that are much more than she could ever imagine.

About the Author – Gypsies, Tramps and Weeia

Elle is the author of two urban fantasy series about superhumans called Weeia, the Unelmoija Series in Miami and the Marshals Series in Paris.

Growing up the only child of a monkey mother and a rabbit father she learned to keep herself entertained and spend time reading. Elle makes her home with her king cat husband in South Florida.

“I highly recommend this book for anyone that loves magic, love, and action,” reviewer says of Timeshifter

One thing I love about this series is no matter how much time I spend away from it I can always just right back into this world. It always welcomes me back with a magic filled hug. This one, just like all the others is very good. It’s filled with action, magic and even has some cute love scenes.

Amy finds out that she might have a new ability and this one may be dangerous. She starts having very vivid dreams about her past but the only difference is when she changes something it really changes her past. So she must be careful not to change her future while her mom, sister and boyfriend race to figure out what is going on with her.

I always love going back to the world of the Weeia. Okay I also kind of wish I was apart of this magical group of people. The more I read into this series the more hooked I get. I need to know what the heck happens next especially after that ending! I can’t believe Elle Boca did that to me but it’s okay I forgive her since she gave me so many adorable Amy and Duncan scenes.

This book is a good blend of action and cuteness. Even though it has serious moments with Amy and her brain situation (nope I’m not telling) it also has cute moments like Amy and Duncan swimming with dolphins. I love that because I would probably have a heart attack trying to keep up with this book if it was full to the brim with nothing but action.

I highly recommend this book for anyone that loves magic, love, and action. It won’t disappoint!