Danni has completed her training to become a marshal, the police sworn to protect Weeia hiding among humans, and is surprised to receive a good assignment in Paris. However, when she gets there Danni discovers that not all is as she was expecting, with an apathetic boss, an office in shambles and her predecessor Marshals dying under mysterious circumstances. Despite the risks, Danni is determined to do her job, even if some in Paris believe they are above the law.

Gypsies, Tramps and Weeia is an action-packed book set in the Weeia universe. It is enjoyable and really well written, especially when describing Paris. This book also had suspense and humour.

Danni is persistent and determined to do a good job and to prove herself, she also comes across as blunt and abrupt but that is just a front because she is really insecure. There are a few secondary characters but only one really stands out in my mind, Iaen, as he is cocky, charming and a loveable rogue. I liked that Ernie was in this book and I hope he is in more of the future novels.

I enjoyed this book and am looking forward to reading the next book in this series. I would recommend Gypsies, Tramps and Weeia to fans of the Weeia series.

“I enjoyed this book,” reader says of Spiritshifter

I enjoyed this book and I am looking forward to reading Unelmoija: The Timeshifter

Loi, an amplifier who is able to develop Weeia’s abilities, is found dead is mysterious circumstances in which the Elders seem to be involved. Amy along with her sister Kat and boyfriend Duncan investigate, but Amy fears she might be next as there is a possibility that she is an amplifier and the murder is targeting them. Amy also wants to help the young Weeia who seem to be not developing their abilities, but is she able to help without her identity being revealed and her life being in danger?

Unelmoija: The Spiritshifters is the enjoyable third book in the Weeia series and I found it was not as dark as the previous books. It is easy to read with humour, romance, and action (although not as much as the previous books). The one small problem I had with this book was that the beginning few chapters were very confusing as it came across as starting part way through.

Amy is selfless as she always thinks of others and is trying to figure out her unusual amount of powers and what it means for her. Kat and Duncan are good secondary characters and I love their interaction with Amy, with Kat’s protectiveness and Duncan’s humour.

I enjoyed this book and I am looking forward to reading Unelmoija: The Timeshifter. I would recommend Unelmoija: The Spiritshifter to fans of the rest of the Weeia series. 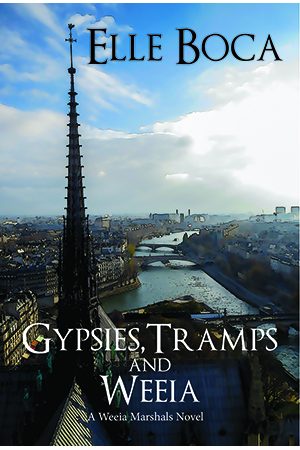 Try your luck to win a copy of the soon to be released Paris urban fantasy from the author of the Unelmoija Series of Miami (South Florida) urban fantasy: http://www.goodreads.com/giveaway/show/168788-gypsies-tramps-and-weeia?utm_medium=email&utm_source=giveaway_approved

Looking for a list of my books on Amazon? See my Amazon Author Page 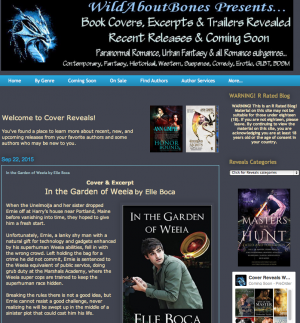 Cover Reveals features In the Garden of Weeia

The kind folks at Cover Reveals feature covers, blurbs, excerpts, and book trailers for recent, new, and upcoming book releases for select genres – without charging a penny. They have been sharing cover reveals and tidbits about the Unelmoija series since the beginning. This week, they highlighted In the Garden of Weeia, Elle’s new novella set in Portland, Maine. With their permission below is a screen capture of their post.

They included a mention of the popular Goodreads giveaway and an excerpt from the book. Plus they posted some killer Tweets. Thank you Cover Reveals!

Review says In the Garden of Weeia is “brilliant, the perfect sample of things to come!”

THIS is Great YA Fantasy!

It takes a special talent to pull off carrying on a series minus the main character, especially when that character was written to be an amazing person. Elle Boca has done it with In the Garden of Weeia. A techno geek gets a second chance at a good life, but his abilities make him fair game for trouble and the wrong choices lead Ernie on a downhill slide to the wrong side of the law. Ernie is always up for a good challenge, but this may be one challenge he should pass on. Re-enter the world of the Weeia, through another portal, and be welcomed back by Elle Boca’s amazing creative skills!

We all get that gut flutter when an author ventures in a new direction to a series. Elle Boca not only took the fork on the left, she executed it flawlessly! When an author can shift focus away from the heart of a series and its amazing characters, she has done her work well! Her style is flows, locks on to her readers easily and she deserves a gold star for sharing the spotlight with Ernie, all thanks to Amy, of course!…And to put it down in a novella? brilliant, the perfect sample of things to come!