“…an amazing ending and perfectly wraps up the series,” reader says of Paradox

I would recommend to all who love great series and writing!

Thankfully this book has an amazing ending and perfectly wraps up the series. The writing is great and captivates you from the beginning of the story and takes you on a great journey with enjoyable characters! The originality is weaved throughout every aspect of this book from the characters to the ending. The timeshifting in most novels is a little difficult to follow for some readers but I feel like Elle did a good job with the aspect and I just think all readers should take their time reading this book to truly enjoy it. I would recommend to all who love great series and writing! I would like everyone to start with the first book in this series and read them all. You will not regret it!

T.M.B.A. Corbett, reader and host of TMBA Corbett Tries to Write (see the original at http://www.tmbacorbett.com/2016/10/book-review-unelmoija-paradox-weeia-5.html)

“I highly recommend this book and this entire series to magic lovers everywhere,” reader says of Paradox

This is a series that I’m sad to see come to a close. I loved every book in this series so much. I know I’ve said this a million times but it’s just so easy to get into this world that Elle Boca created. The magic in this series is so unique and fun to read. So seriously can I be a Weeia? Pretty please.

This book takes place a few weeks from the ending if last book. With the way the previous book ended I knew this book wouldn’t be it’s super upbeat and cheerful self. There’s just no way to be cheerful after a tragic thing like that happens. Sorry, if you want to know the awful thing that happened you’ll have to read to find out. Even though it wasn’t all cheery it wasn’t depressing in anyway. I did kind of miss the carefreeness of the other books sometimes, this one was a tad more serious. I also kind of missed Duncan and Amy moments but I completely understand the reasons for that. Plus with the ending being that amazingly adorable, how can I say anything negative?

Timeshifting was explained a lot more thoroughly in this book. It was so easy for me to picture those scenes with Amy and her Grandma traveling through time. This family is seriously so amazing, I just love how close they are. Something that I don’t know if I ever commented about these books is about how passionate the characters are about their food. Not kidding, they make some amazing sounding food. Can I have some recipes, please?

Okay the only negative things I can say about this amazing book is that there were a couple of times that I felt like the story got a little slow. I highly recommend this book and this entire series to magic lovers everywhere.

Timeshifter is “…like a movie playing out in front of me,” reader says

This was the best book in the series for me! The writing is so fantastic and realistic like a movie playing out in front of me. I loved the main character Amy and following her throughout the story was fun! There is so much action in this book it make for a fast enjoyable read! I loved all the aspects of this book from the action, to the gripping mystery, and exciting romance. Yeah this was a great read!

I would recommend to anyone who loves paranormal, romance, and/or mystery books! I do not feel like you have to read the whole series, if your not a series person, each book stands on its own and reading anyone and not all will not leave you feeling like your missing something. If you read the whole series though you’ll get to know the characters better and get other great mysteries. So go out and read this book or any book in the series today!!

Reader says, Paradox is “enjoyable conclusion to the Weeia series”

Recommend Unelmoija: Paradox and the rest of the Weeia series to fans of YA paranormal novels

Still reeling from the death of her mother, Amy is trying to learn more about her powers when Vlad interrupts her loved ones and her life again. He tells them that his father Klaus is going to destroy all of Florida if he does not kill her father Thomas. Klaus is sure that Thomas is responsible for his father’s death but she is able to convince him to use her powers to discover what really happened. What she discovers doesn’t just impact her father and Klaus but has dire consequences for those she loves and they will have to make a choice that will change everything.

Unelmoija: Paradox is the fifth and enjoyable conclusion to the Weeia series. It is well written and has a lot of tension but it was not the fastest paced. This book also had twists and turns even if I did predict some of them.

Amy has grown since the first book and thinks things through a bit more but she is still active, resilient and good natured. Duncan and Kat are just as good and interesting characters as in the other books as they are both motivated people and are resourceful, especially when it comes to helping Amy. We also got to know Amy’s maternal grandparents better and I really liked how easy going and kind they are.

I was not expecting the ending but I was not a big fan of it as I felt it went on for too long. I would recommend Unelmoija: Paradox and the rest of the Weeia series to fans of YA paranormal novels. 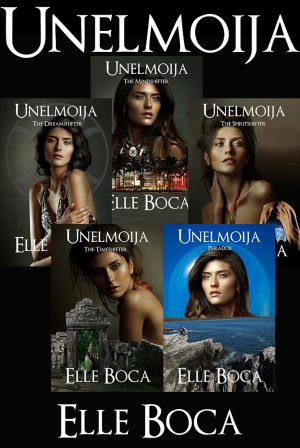 The Weeia are superhuman. They look perfectly normal, but can do extraordinary things. Amy’s dreams become reality and Duncan walks so fast he becomes invisible. Meet them and follow their adventures in the Miami urban fantasy Unelmoija Series.

To celebrate the release of Gypsies, Tramps and Weeia, the first book in the new Paris urban fantasy Weeia Marshals Series, the Unelmoija Series is on sale for one week only February 18-25, 2016 on Amazon. Scoop up the entire five book series for the regular price of just one book!

“There was so much to like about this book,” reviewer says of Spiritshifter

This is one of the most creative series’ I have ever read. There is so much detail in this magical world that I wish I lived in it, and that I was a Weeia. This book was lighter and more fun than the two before it, it wasn’t quite so action packed and danger filled. Normally I would be upset by the smaller amount of action but there was more Duncan so that made up for it.

Amy is still trying to figure out everything there is to know about what she is, a Weeia. Along with her boyfriend Duncan and sister Kat they all look into the death of their friend Loi, an amplifier. When it comes to light that Amy may also be an amplifier they realize that she too could be in danger.

Even though there is less action in this book does not mean Amy is in less danger. The poor girl is a danger magnet. At least she has her amazing boyfriend and touch as nails sister to look out for her. Have I mentioned how much I adore Duncan? I was so excited this one had so much more Duncan than the second book, I was going through withdrawals. And Amy and Duncan together are the cutest thing ever. I also liked how many Kat and Amy scenes there were. I’m a big sister so I really enjoyed their bond and appreciate it. Their closeness brought humor to the book which made it more fun to read.

I’ve read so many books that I am automatically suspicious when there is a new character. That goes the same for Vlad. I did not trust him from the minute he was introduced and look forward to see what comes from him in future books. I know he’s not gone yet.

There was so much to like about this book that it’s really difficult to form my thoughts around each thing. This book explained more about Unelmoija and the different forms of Weeia abilities. It was fun to read, had humorous scenes, Amy showed a little more of her badass self and the many Duncan/Amy and Kat/Amy scenes. It delved into the musical atmosphere some which I always think is awesome.

This is just an amazing series and I can’t wait to read more.