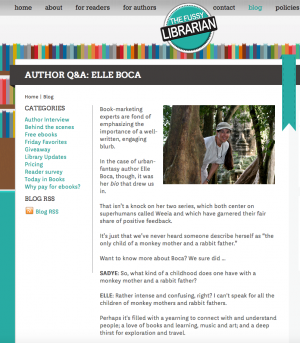 The Fussy Librarian matches ebook readers with authors. They recently profiled yours truly in an editorial author Q & A. Below is the interview, with their permission (thank you Sadye!):

Book-marketing experts are fond of emphasizing the importance of a well-written, engaging blurb.

In the case of urban-fantasy author Elle Boca, though, it was her bio that drew us in.

That isn’t a knock on her two series, which both center on superhumans called Weeia and which have garnered their fair share of positive feedback.

It’s just that we’ve never heard someone describe herself as “the only child of a monkey mother and a rabbit father.”

Want to know more about Boca? We sure did …

SADYE: So, what kind of a childhood does one have with a monkey mother and a rabbit father?

ELLE: Rather intense and confusing, right? I can’t speak for all the children of monkey mothers and rabbit fathers.

Perhaps it’s filled with a yearning to connect with and understand people; a love of books and learning, music and art; and a deep thirst for exploration and travel.

SADYE: When did you start writing, and why?

ELLE: In one way or another, I have been writing most of my adult life.

I began writing fiction about five years ago when I finally had the courage after a story popped up that I wanted to share.

SADYE: What has been the most rewarding part or parts of being an author?

ELLE: It’s the joy of knowing readers like the characters, settings, and stories. Every single time a reader finishes a book and tells me he or she enjoyed it, I feel rewarded. That is the main reason I keep writing.

There are so many wonderful books, talented authors, and fellow indies who place their hearts and souls in their work. For a reader willing to wade beyond the same old bestsellers, it is challenging to find a book to read from an unfamiliar author. That someone takes a risk and picks up my book is a big vote of confidence.

That she or he dedicated time, attention and emotional energy to reading my book is a huge reward. And readers who read all of my books fill me with immense joy.

Each of those readers — especially the ones who take the time to tell their friends or rate or review the books — makes my day even if I don’t find out until weeks or even months later. I feel a particular sense of reward when fellow authors tell their followers about my work or read my books.

When someone makes a comment that tells me she or he paid attention to the details of the story, the cover, the Weeia abilities or origins, and the settings, it makes me jump with joy.

SADYE: What has been the most challenging?

ELLE: Finding an audience. Based on reader reviews and ratings, people who read my books like them. Getting the books in the hands of those people is the hardest challenge.

ELLE: The idea for Unelmoija sort of popped into my head. I kept thinking about it until it gelled into something solid enough to describe in writing.

That was the birth of Unelmoija: The Dreamshifter, the first book of the Weeia superhumans five-book series set in Miami. Like the story, the concept of the Weeia people came to me.

The meaning of Unelmoija (it’s a real word) is revealed in that series. Spoiler alert: It refers to one of the most important superhuman abilities of the main character.

That is how I came up with the main character’s name, pronounced Ooh-nell-moh-yah.

ELLE: At the moment, we are following the adventures of Danni, the head marshal of the secret Weeia offices in Paris. Next is An American Weeia in Paris, book four of the Paris Marshals Series. Stay tuned.

See the interview on the Fussy Librarian website at http://www.thefussylibrarian.com/blog/author-qa-elle-boca/

The Fussy Librarian matches ebook readers with the genre of books they like and also their preferences about content. Do you only read mysteries without profanity, violence and sex? Read just memoirs and gory horror novels? No problem. You can sign up to receive bargain books, which must meet review standards, or only free ebooks at thefussylibrarian.com. We enjoy introducing readers to authors through our Q&A series as well. Writers who’d like to be featured can contact Sadye.