Kelly Smith, a California book blogger, journalist, and host of Kelly Smith Reviews, recently interviewed Elle. With her permission below is a copy of the interview. Thank you Kelly! 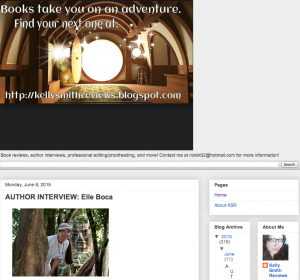 1. When/why did you decide to become a writer?

I’ve been a non fiction writer all my adult life although I only began writing fiction a few years ago.

2. What authors inspired you when you were younger? What books do you enjoy reading today?

The list is long. Along the way I have enjoyed classic Greek and Roman mythology, literature icons to fiction favs from Robert Ludlum, Wilbur Smith, and Anne Rice to name a few. In the last few years I have been enjoying urban fantasies from the likes of Jim Butcher, Charlaine Harris, Ilona Andrews, Kelley Armstrong, Patricia Briggs in no particular order. I also like discovering indie authors, especially in urban fantasies. Some authors whose work I read recently include Nicholas Rossis, Effrosyni Moschoudi, Madhuri Blaylock and Teresa Carlson. I also have a long wish list including:  Lilo Abernathy, Tima Maria Lacoba, Sol Mage, Rose Montague, and Theresa Snyder.

3. What was the inspiration behind your Weeia series?

Everything began with Amy. She (in my own head) asked me to tell her story and it blossomed from there. After noticing so many of the fantasy and sci fi movies in the mainstream revolve around men with superpowers and rarely any women with impressive powers I wanted to explore women’s empowerment through a reticent yet very powerful beneficent leader. Amy is the ultimate superhero because she has all the abilities yet she craves none of the power.

4. What are you working on now that the series is done?

I’m working on a Weeia stand alone story titled In the Garden of Weeia about one of the minor characters we met in the series. I’m also working on a follow up series.

5. Foodies are in love with certain aspects of the series. Are you a foodie as well?

I’m so glad you said that! I worry that the food mentions annoy readers…

Guilty as charged. Needless to say I can’t eat the way Duncan and the Weeia do!

6. Were any of the characters personalities or emotions taken from real life?

Certainly real life is always an inspiration although in the stories the characters are an amalgam of borrowed emotions and personalities real and imagined.

7. What other genres would you like to try your hand at?

For now, I have my hands full. One day? Mystery.

8. If you could be any of the characters in the series, who would you be and why?

It’s a difficult question. On the one hand, Amy because she’s so amazing. On the other hand, there is so much weight on her shoulders. Kat, her sister, is a compelling character as well, plus she’s a great warrior.  I could go on…

9. How did you decide what superhuman powers to give each character?

I think of them as abilities like the ones we humans have such as our senses: hearing, sight, smell, etc. The abilities for the main characters seemed to match their personalities or roles in the story. In some cases, they made sense like Amy and Kat’s parents’ abilities. They also related to the four henkis or ability types.

10. Would you like to see as the Weeia series a film franchise or TV series? If yes, who do you want to see play your characters?

Yes, that would be wonderful! Pierce Brosnan could play Amy and Kat’s father. He has the devilish good looks of Thomas McKnight. Although his ready smile might have to disappear for the role, ha, ha. Not sure who would be thin and fast like a runner to play Duncan. I don’t know about Amy. Her character requires a youthful personality yet she is very mature for her age.

11. Where do you see yourself and your career in the next ten years?
That’s a tough one. I hope to have found an audience and be writing new urban fantasies.

12. What would you be doing if you weren’t writing?

I would love to travel the world, go on safari, support conservation programs, especially to protect wildlife or make movies. Oh, you mean for a living? I’m not sure. I’m still finding my voice and evolving…

13. Did you originally plan for this to be a series, or did the narrative just keep going?

It started as a short story or novella and grew to a full length story which flowered into a series of five books.

14. What authors, dead or alive, would you like to collaborate with?
Another tough question! Collaborations are difficult. Wilbur Smith if it had anything to do with Africa. In fantasy, Anne Rice, Jim Butcher, and Ilona Andrews come to mind.

15. Thank you for participating in the interview. Can you please leave the readers with three things that may surprise them about you?

Cape Town is one of my favorite city settings

To read the interview on her site visit http://kellysmithreviews.blogspot.com/2015/06/1.html