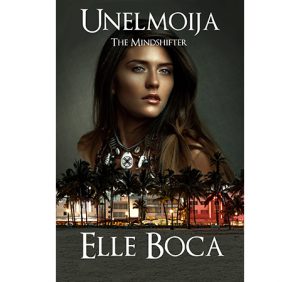 The book marks the second title in the new urban fantasy series by Elle Boca, a South Florida author

As college friends Amy, Krissa and Lilly head to South Beach for a girls weekend they have no idea of the evil that lurks in plain sight. When Lilly goes missing Amy and Krissa discover they’re the only ones that might be able to save her by using Amy’s superhuman abilities. They pick up Lilly’s trail only to be swept up in a life and death conflict larger and darker than they imagined. An unexpected encounter turns the stakes in their favor briefly before they find out the daunting odds they face to find and rescue Lilly before slavers sell her and she disappears. To make matters worse, Amy may have broken the Weeia’s highest law and used her abilities in front of humans.

In book two of the Weeia series, Unelmoija: The Mindshifer, Amy’s courage is put to the test. The Weeia, others like her who live extra long lives and have superhuman abilities, will not get involved in human affairs, even to save lives. Will her new found allies, human and Weeia, help her? What of Duncan, her love interest? What will become of Amy if she’s captured? Who is the half demented man torn between killing and hugging her? She must rely on herself and others to save her friend and escape.

In the first book of the series, Unelmoija: The Dreamshifter, the life of a pretty yet ordinary young woman is transformed beyond her imaginings when a traumatic incident changes her forever. She has an unexpected encounter with the father she never knew and meets a mysterious man that repels and attracts her at the same time. She discovers she’s not who she thinks she is. The Unelmoija books form the beginning of a fun, mysterious, and adventurous new series from a South Florida author who reveals an incredible story of what humans might become. It is sure to inspire adult readers.

Elle Boca began reading at an early age. She recently explored a new found passion for fiction writing. Since completing the creation of the world of the Weeia and writing the first two books, Unelmoija: The Dreamshifter and Unelmoija: The Mindshifter, she began writing the third novel in the series, Unelmoija: The Spiritshifter. Details at https://elleboca.poyeen.com

Note to editors: Advance reader copies and images are available.