Reader Anne Marvin, who writes thought provoking opinions about fantasy fiction at TruthinFantasy.com, recently shared a post in which she mentions the Weeia Series and spiritshifting. It’s about… well rather than me trying to describe her article it’s better if you read it below (with her permission). Thank you, Anne! 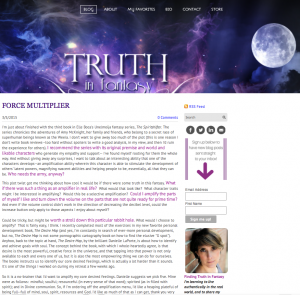 I’m just about finished with the third book in Elle Boca’s Unelmoija fantasy series, The Spiritshifter. The series chronicles the adventures of Amy McKnight, her family and friends, who belong to a secret race of superhuman beings known as the Weeia. I don’t want to give away too much of the plot (this is one reason I don’t write book reviews–too hard without spoilers to write a good analysis, in my view, and then I’d ruin the experience for others). I recommend the series with its original premise and world and likable characters who generate my empathy and support– I’ve found myself rooting for them the whole way. And without giving away any surprises, I want to talk about an interesting ability that one of the characters develops–an amplification ability wherein this character is able to stimulate the development of others’ latent powers, magnifying nascent abilities and helping people to be, essentially, all that they can be. Who needs the army, anyway?

This plot twist got me thinking about how cool it would be if there were some truth in this fantasy. What if there was such a thing as an amplifier in real life? What would that look like? What character traits might I be interested in amplifying? Would this be a selective amplification? Could I amplify the parts of myself I like and turn down the volume on the parts that are not quite ready for prime time? And even if the volume control didn’t work in the direction of decreasing the decibel level, could the increase button only apply to those aspects I enjoy about myself?

Could be tricky, but might be worth a stroll down this particular rabbit hole. What would I choose to amplify? That is fairly easy, I think. I recently completed most of the exercises in my new favorite personal development book, The Desire Map (and yes, I’m constantly in search of ever-more personal development, but no, The Desire Map is not some pornographic cartography book on how to find the elusive “G spot”). Anyhoo, back to the topic at hand, The Desire Map, by the brilliant Danielle LaPorte, is about how to identify and achieve goals with soul. The concept behind the book, with which I whole-heartedly agree, is that desire is the most powerful, creative force in the universe, and that tapping into that power is not only available to each and every one of us, but it is also the most empowering thing we can do for ourselves. The books instructs us to identify our core desired feelings, which is actually a lot harder than it sounds. It’s one of the things I worked on during my retreat a few weeks ago.

So it is a no-brainer that I’d want to amplify my core desired feelings. Danielle suggests we pick five. Mine were as follows: mindful; soulful; resourceful (in every sense of that word); spirited (as in filled with spirit); and in Divine communion. So, if I’m ordering off the amplification menu, I’d like a heaping plateful of being full–full of mind, soul, spirit, resources and God. I’d like as much of that as I can get, thank you very much. Crank up the volume till you can hear it four lanes away from where my car radio is playing. I want maximum power on my sub-woofer so it’s all about that bass. You know what I’m talking about, right?

And while I’m at it, playing my tunes of fullness at maximum volume, let’s add grateful, heart-full, truthful, peaceful and full of kindness, generosity and good will toward all. Because, honestly, that’s really what I want. If I can amplify my positive characteristics and abilities like Ms. Boca’s characters, I want to be as full of the good stuff as possible. If the down volume button is in good working order, let’s dial down pettiness, schadenfreude, envy, jealousy, self-righteousness, controlling and manipulative tendencies, not to mention fear, resentment, and general discontent. Wouldn’t that be something? I can hardly imagine it, though I suspect it would be miraculous to experience.

Which leads me to ask, logically, whether any of this magical amplification and commensurate sound dampening is possible in the real world, and if so, how can we achieve it? As you may have cottoned to by this point, I do, in fact, believe that the kind of amplification described in the Unelmoija books is possible in the real world. How to do it, you may wonder. The same way you can get to Carnegie Hall: practice, practice, practice. Life gives us so many opportunities to practice being full of the good stuff and loving toward all. And because practice makes perfect, the fact that we sometimes fall short of the mark is no excuse not to pick ourselves up and practice some more, perfection being an ideal not actually achievable in the real world. We must avoid the massive pothole on the road of life called perfectionism, lest it derails us on our journeys as we become mired in the tar pits of perfectionism. Just don’t go there. Turn down the amplification volume on perfectionism and turn it up on persistence in getting back on the horse after we’ve been thrown off that damn beast.

So thank you to Elle Boca whose books are a fun romp through an interesting world filled with [mostly] nice people. I love the idea of amplifying my good traits and I love the idea that there might be others out there who can help me amplify the good stuff in my life. And the idea I love best of all is the one where I act as the amplifier for others around me, and help them turn up the volume on the fullness of their lives.