So for all you Urban Fantasy fans out there, check out Unelmoija: Dreamshifter 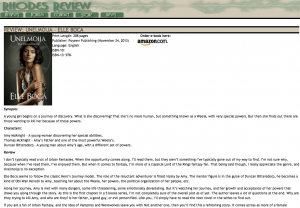 I don’t typically read a lot of Urban Fantasies. When the opportunity comes along, I’ll read them, but they aren’t something I’ve typically gone out of my way to find. I’m not sure why, because when I’ve read them, I’ve enjoyed them. But when it comes to fantasy, I’m more of a classical Lord of the Rings fantasy fan. That being said though, I really appreciate the genre, and Unelmoija is no exception.

Elle Boca seems to follow the classic Hero’s journey model. The role of the reluctant adventurer is filled nicely by Amy. The mentor figure is in the guise of Duncan Bittersdorp, he becomes a kind of Obi-Wan Kenobi to Amy, teaching her about the Weeia, her powers, the political organization of her people, etc.

Along her journey, Amy is met with many dangers, some life threatening, some emotionally devastating. But it’s watching her journey, and her growth and acceptance of her powers that draws you along through the story. As this is the first chapter in a 5 books series, I’m not completely sure of the overall plot as of yet. The author leaves a lot of questions at the end. Why are they trying to kill Amy, and who are they? Is her father, a good guy, or evil personified. Like you, I’ll simply have to read the next novel in the series to find out.

If you are a fan of Urban Fantasy, and the idea of Vampires and Werewolves leave you with Not another one, then you’ll find this a refreshing story. It comes across as more of a female superhero story, with her, much like young Peter Parker, discovering the extent of her power and what having them means to her future. So for all you Urban Fantasy fans out there, check out Unelmoija: Dreamshifter. Be sure to drop back by and let us know what you thought.