On May 19, 2018 Sally’s Cafe and Bookstore featured Gypsies, Tramps and Weeia on Smorgasbord – Variety is the Spice of Life. Below, with her permission, is a copy of the feature. Thank you, Sally! 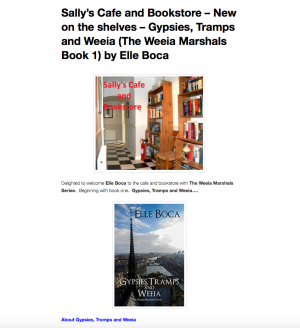 Sally’s Cafe and Bookstore – New on the shelves – Gypsies, Tramps and Weeia (The Weeia Marshals Book 1) by Elle Boca
Posted on May 19, 2018 by Smorgasbord – Variety is the Spice of Life.

Delighted to welcome Elle Boca to the cafe and bookstore with The Weeia Marshals Series.. Beginning with book one.. Gypsies, Tramps and Weeia….

About Gypsies, Tramps and Weeia

One of the reviews for the book

Fun Tale By Angela Kay on December 21, 2016
Gypsies, Tramps and Weeia started out with the examination of a young Weeia girl, Danni, who needs to pass in order to become the next level marshal. Weeia is creatures who appear like humans at first glance, but should they gather in a crowd, they’d stand out too much from distinctive features. They possess special powers for the purpose of protecting both humans and Weeia.

When the story opens, we find that Danni’s family makes it hard to build a name for herself. Aside from a couple of faithful friends, Danni is basically paying for the sins of her family. She wants nothing more than to prove that she’s worth a second glance. She finds that chance in her first assignment: Paris.

Having never been to Paris before, I felt as though I was right there. The idea of having the first assignment in Paris can make anyone walk in an excited daze. However, Danni’s excitement is short-lived when she arrives at a dirty apartment, her boss doesn’t care to meet her and she’s stuck trying to orient herself in a new, strange place. But that won’t last for too long–soon, she will be swept up in an adventure of a lifetime.

The plot was well thought-out, characters three-dimensional. I truly enjoyed this fantasy story because it was different than most that I’ve read. There were a few problems in the editing but still didn’t keep me from becoming immersed in this wonderful tale of Gypsies, Tramps and Weeia.

Read the reviews and buy the book: https://www.amazon.com/Gypsies-Tramps-Weeia-Marshals-Book-ebook/dp/B01A01R5SI

Other books by Elle Boca

Feb 25, 2014 Nicholas Rossis rated it Five Stars.
I don’t know what I expected when I read Unelmoija, the Dreamshifter. Probably another coming-of-age, young adult story. Instead, I was treated to an endearing, rich tale, expertly written, with many twists and surprises that made me finish it in a single weekend, unable to put it down. Boca’s writing is sharp and witty, much like Amy, her lovable heroine. It’s hard to believe this is her debut novel, first in the series.

I loved the clearly defined characters, and particularly how she avoided using a cliched “good vs. bad” approach to them. Her nuanced descriptions add much to the story, as does her constant mentions of food that reminded me of Camilleri’s books.

I’m now off to read the next book in the series, the Mindshifter…

Read the reviews and buy all the books: https://www.amazon.com/Elle-Boca/e/B00HRCBEYK

Elle is the author of the Weeia urban fantasy series about superhumans. The Unelmoija series is set in Miami. In the Garden of Weeia, a novella, is set in Portland, Maine, and her newest Marshals Series is set in Paris, France. Growing up the only child of a monkey mother and a rabbit father she learned to keep herself entertained and spend time reading.

Portland, Maine urban fantasy novella – In the Garden of Weeia

Thank you for dropping in today and please help spread the news about Elle’s books.. thanks Sally

Author Sally G. Cronin, host of Smorgasbord Invitation, lists the work of fellow authors on her virtual bookshelf. She has written short stories and poetry since a very young age and went ‘Indie’ in 1998. She combined her retraining as a nutritional therapist with her love of writing in her first book Size Matters, which tells the story of her journey from a very overweight 24 stone – 330 pounds to a slimm-ish and healthier individual.