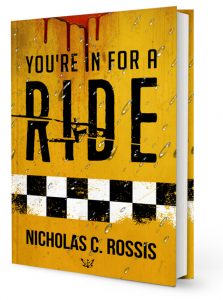 My fellow fiction author Nicholas C. Rossis just released a new book of short speculative fiction stories. I have enjoyed his past short story collections (The Power of Six and Honest Fibs) and thought you might too.

He graciously accepted my invitation to share the news and included a sample short story. He also is offering a complimentary copy of his book to any of you who requests it (see the link below). Congratulations on your new book and thank you, Nicholas!

Read for free with KU or request a free review copy!

Exciting times, indeed. You’re in for a Ride, my 4th collection of short science/speculative fiction stories is now live on Amazon! Those of you who have read one of my previous works will be familiar with my style. For everyone else, here is the blurb:

A force field stumps a group of intrepid explorers in desperate need of what lies behind it. Two time-travelers discover the dangers of messing with the timeline. And what happens when not one, but two dark prophecies clash head-on?
These are just a few of the stories in You’re in for a Ride, a collection of speculative and science fiction short stories that explore our perception of the world around us. Is there more to the world than we can see, or can our senses deceive us?

“Nicholas Rossis is a master of the craft… I found myself looking forward to coming home so I could dig into the next story. Each story pulls you into its unique little universe and takes you on a ride where the tracks are hidden, and you can’t see the corners up ahead.”
~ Nat Russo

As always, anyone interested in a free review copy can contact me and I’ll be happy to send them one (or to enroll them in my ARC list, of they so wish).

Sample Story: A Crystal Too Far

The sergeant wipes thick beads of sweat from his brow with fingers trembling with exhaustion. “It’s useless, sir. There’s no way we can get to the crystals in time.”
The colony delegate—a member of the royal court, no less—glares at the alien force field separating them from their objective. “And you’re sure there’s no opening?”
“My men have searched every inch of it. There seems to be no way in or out. Just a groove at the top. When we first discovered it, everyone thought we’d cracked it. But it’s sealed. Won’t budge an inch.” His face twitches. “All of our attempts to enter have been in vain.”
“How about making an opening? What have you tried so far?”
“Everything we can think of,” the man says with a resigned sigh. “Chemicals. Brute force. Private Jenkins here even tried chewing through.” He points at a man massaging his swollen jaw.
The delegate spits on the ground. “I don’t need to tell you how badly the colony needs those crystals. You have no idea how low our stockpile is by now. We may not survive the winter without them—and spring is still a long time away.”
The sergeant’s face drops even further. “Yes, sir.” He rubs the back of his head for a few awkward moments. “Your orders?”
The delegate casts him a distressed glance, then starts pacing back and forth, mumbling. He only pauses twice: once to curse at the transparent material that seems to be mocking them, and once to curse at the aliens who have placed it there. The all-powerful creatures who have built their fortress next to the colony, paying no attention to its inhabitants and their needs. The enigmatic neighbors have brought much-needed supplies with them but have steadfastly refused to share—or even acknowledge the colony’s continuous pleas for cooperation.
The first delegation had been ignored. The second, stomped on. Whether on purpose or by accident was the subject of much-heated debate in the colony. Whichever it was, it had led to this ill-advised attempt at thievery.
“Let’s face it, sir,” the sergeant whispers once the man runs out of swearwords, “the creatures have won this round.”
“Impossible,” the man snaps at him. “We have the fiercest arsenals of weapons. We have conquered every corner of this planet. We have brains and brawn. There must be a way.” The delegate stops pacing and whirls around. “What about digging underneath? How far below the ground does the barrier go?”
The sergeant stomps one foot to emphasize the ground’s stiffness. “It stops at the surface, but the ground isn’t the usual soil one might expect. We’ve never seen anything like it. Our diggers’ best estimate is that it’d take us months to break through.”
“By which time the crystals will be gone.” The delegate explodes in a fresh barrage of curses, this time shaking his fist at the soaring barrier. He freezes in the middle of a particularly nasty—and unlikely—accusation involving the alien who had invented those hellish materials, certain members of his family, and a cucumber. His eyes light up. “We lift it.”
The sergeant presses his lips together and examines his hands, rubbing out an invisible smudge from his palm. “Already tried it. No use. We couldn’t move it an inch. Even with our entire colony pushing, it won’t budge.” He discreetly wipes the delegate’s spittle from his cheek as the man starts screaming more obscenities at the obstacle.
Finally, the man hangs his head in defeat and hunches over, placing his hands on his lap. “Who will inform the court?”
The sergeant and a dozen privates behind him all take an involuntary step backward. No one speaks a word.
The delegate looks at them with dark eyes. “Who will inform the court?” he repeats in a low voice. After a moment of awkward silence, he shakes his head and straightens his back. “Very well. You may return to the colony. But we leave behind sentries. As many men as you can spare. Sooner or later, the creatures will need their crystals. I want to know the moment that happens.” A glimmer of hope shines in his eyes. “Maybe they’ll forget to drop the force field. Or they’ll leave an opening unguarded. Who knows? Perhaps we’ll get lucky.”
As the sergeant starts barking orders, the delegate stares with greedy eyes at the amazing sight of a whole mountain of energy crystals, a mere hand’s reach away. “One way or another, we’ll get our hands on you,” he whispers. “That’s a promise.”

The old woman reaches for the tea cup and clicks her tongue. “Where is my head?” She turns to the young man sitting opposite to her. “Be a dear and fetch me some sugar, will you, darling? It’s on the kitchen top.”
The man pushes back his chair and stands up. “Of course, Auntie.”
“Be sure to close the lid,” she shouts after him as he walks into the kitchen. “The ants around here have gotten a bit… antsy lately.” She chuckles at her own joke.
“Yes, Auntie,” he shouts from the kitchen. He returns a moment later holding a large glass jar in his hands. “You weren’t lying about those ants. There’s at least a dozen of them on the kitchen top. It almost looks like they’re guarding the sugar cubes.” He pushes the ornate silver tray covering half the table a few inches to the side and places the jar next to the steaming teacups. “You should get an exterminator.”
She gently smacks his hand. “That’s a terrible thing to say. They have as much right to be here as you and me.” She lifts the lid and skillfully picks a cube with a fine silver tong. The sugar cube splashes into the hot tea and immediately starts melting. “As penance, you’ll leave a cube outside for them when you take the jar back,” she says as she lifts the cup and stirs her tea.
The young man chuckles and glances at the kitchen. “Well, that should make a few ants very happy.”

If you enjoyed that, you can read You’re in for a Ride for only 99c for a limited time only or request your review copy for free!