“Another shiny gem,” reviewer says of Smells Like Weeia Spirit

Moments of humor, attitude and brilliant dialogue once again will bring start to finish entertainment and adventure when Danni is involved!

Hidden within the human community are people gifted with “super powers.” To remain under the radar of the “normal” people, the Weeia police their own kind. Danni Metreaux is one of the Weeia Marshals, working out of the Paris office, a fish out of water, the square peg in a world with round holes, a bull set loose in a china shop. But Danni is dedicated, smart, well-trained and a force to be reckoned with when she is on a case.

The latest case to come across her desk smells of trouble, mystery and danger for the entire Weeia community. With her trusty sidekick, the handsome, poised and wealthy Sebastian, must discover what is causing gifted Weeia to go berserk like puppets on the string of crazed masters. Their investigation leads to an exclusive private school and they must face the formidable School Mistress to uncover clues as to why people are dying mysteriously after a rapid but unknown disease and what link it has to the academy.

There may be more to worry about as a Weeia perfumer becomes entangled in a deadly chemical attack and Danni realizes that something is rotten in Paris and the Weeia could be outed to the world. But Danni may not be at her best as she reels from news that will bring our heroine to her emotional knees.

Elle Boca is back with another piece of the saga that is Danni Metreaux’s life. SMELLS LIKE WEEIA SPIRIT not only demands that Danni step up to the plate once again, but to do it with only the support of her partner as she continues to be treated as a second class citizen by both her superior and her underlings. Danni is the heroine you want to cheer for, to hug and to stand up for. Sure she is a little hot-headed, less than diplomatic, but no one is more dedicated to doing the right thing.

Get ready to learn what most humans don’t, there are those among us that have special powers and there is one small woman determined to keep both worlds safe, while hiding her world from danger. Moments of humor, attitude and brilliant dialogue once again will bring start to finish entertainment and adventure when Danni is involved! Another shiny gem form Elle Boca!

When Marshal Danielle Metreaux and her junior partner, Sebastien, answer a call to investigate a student’s death at the Academie Superieur de Goin, (Sebastien’s upper class private school alma mater) she was as unprepared for the uncaring defensive posture of the school administrator (an old friend of Sebastien’s family) as she was the free use of narcotics among the students. With nothing to indicate a homicide, they must assume the death was the result of accident related to the student’s use of drugs.

However, when other Weeia began to act strangely in a manner that would reveal their presence to normal humans, Danni and Sebastien must intensify the investigation. At a loss to explain the phenomena, they must enlist the aid of the CUT Team to resolve issues until a full time command center is organized with Danni’s boss, Francois, in command. When Danni is side-lined during the investigation with a personal loss, Sebastien steps in with the help of a Syrian chemist and provides the expertise need to allow Danni to figure out what is causing the disruption among the Weeia.

Once again, we have Danni Metreaux who is beginning to feel increasingly comfortable in Paris, and who is more comfortable with Sebastien as well. Her boyfriend, Iaen, is a big help to her adjustment, but is not destined to be a permanent part of her life. The intensity of the crisis for Weeia forces Francois to become more active, and Danni who has come to the attention of the CUT team leader may have a chance for advancement outside Paris.

As are the other Weeia books by Elle Boca, Smells Like Weeia Spirit should be entertaining to anyone who likes an investigative adventure with a light fantasy flare. 4-Stars

Four stars from Midwest Book Review for Weeia on My Mind

Established in 1976, the Midwest Book Review is committed to promoting literacy, library usage, and small press publishing. It featured a review of Weeia on My Mind in the March 2017 issue. With the publication’s permission below is the entire review. Our thanks to reviewer Clabe Polk and the Midwest Book Review!

When we last joined Danni Metreaux, a third level Weeia marshal assigned to Paris in Gypsies, Tramps and Weeia, she had just finished dealing with a threat from a band of Gypsies with the grudging assistance of her boss, Francois. In the course of the earlier Gypsy investigation, she met a young Weeia man named Iaen and now the beginning of a romantic relationship begins to bloom through Danni’s confusion about her job and her life in Paris.

She is beginning to feel more comfortable as she meets more people and she begins to feel a little less isolated, but only a little since Francois is more remote than ever and Madame Marmotte continues to trash her behind her back. Now, she’s faced with training a new level 1 marshal, Sebastien, whom she was neither expecting nor prepared for. Worse, he is Madame Marmotte’s nephew, has Francois’ approval and comes from an influential Parisian family. To top it off, Sebastien appears just in time to save her from getting her ass kicked by a gang of Serbian-Croatian mobsters. How embarrassing!

Despite that, they are soon deep into a case involving one of a kind art pieces apparently stolen from a private collection, and case in which a Weeia exhibiting a particularly strong gift of mental manipulation is allegedly manipulating humans to commit theft.

Like Gypsies, Tramps and Weeia, Weeia on My Mind is entertaining and the reader finds themselves rooting for Danni to overcome her challenges in Paris. There are hints about why Francois is not supportive, but his real story remains to be told. This book introduces Sebastien as Danni’s junior partner and the route through which she can begin to interact with some the Parisian elite. It likewise identifies Iaen squarely in the role of Danni’s boyfriend. Ho hum, I guess action and intrigue aren’t enough; there must be some romance somewhere I suppose.

Oh…the story? If you want to know about it, buy the book. Those who love cozy mysteries, light fantasy and intrigue with occasional intense action should love it! 4-Stars

“Weeia on My Mind kept me turning the pages,” author says

When we first met Danni in Gypsies, Tramps and Weeia, she was in training at the Marshall Academy. Now she’s graduated and has been spending the last seven months in Paris on her first assignment. Her boss doesn’t like that she’s been assigned to work under him. She’s been living in a rodent-infested apartment until she’s given the opportunity to upgrade. And her first encounter with a new recruit, Sebastien, leaves much to be desired if you ask her.

While training Sebastien, they come across a case where an affluent couple’s necklace and painting were stolen. During their interview with the couple, Danni and Sebastien find that they have a detached attitude toward the theft. Once the items are mysteriously returned, the couple still seems to not care about the whys or whos their possessions were taken.

Aside from all that, Danni reconnects with a former interest and falls head first. He’s what most every girl wants to bring home to Mom and Dad: a bad boy.

I have to say I enjoyed the first book in the Weeia Marshals series, Gypsies, Tramps and Weeia, the most. But that’s not to say I didn’t enjoy this one. I did. Weeia on My Mind kept me turning the pages even when I needed to put it aside. I loved the action, the mystery, and romance was a big part of the story as well.

Danni is a character to adore. She’s snarky, witty and fun. She knows her stuff and despite what others think of her, she’s out to prove any haters in her life that she knows her job and that she can do it well. Of course, she has a lot of trouble doing so, but luckily, after an awkward first meet with her new trainee, she found a fellow Weeia who actually doesn’t treat her like she’s weed to destroy.

Weeia on My Mind has just about everything you’d want in a story. Romance, action, intrigue, betrayal…you name it, and it’s there. It has a much darker tone than in the previous book but any fan of urban fantasy is bound to enjoy.

In my opinion, there is no need to read the books in order. But I say if you want to pick up a copy of Elle Boca’s novel, start with Gypsies, Tramps and Weeia, the first in the series. You’ll get to know Danni a little and by the time you read Weeia on My Mind, it’ll be like having a cup of coffee with a friend. 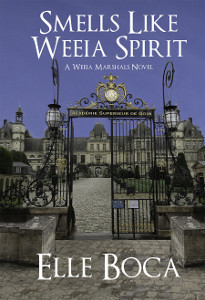 Would you like a chance to win a print copy of Smells Like Weeia Spirit, the latest Marshals book, a Paris urban fantasy about superhumans? Follow the links below.