Anne Marvin blogs at Truthinfantasy.com, saying, “I’m learning to live authentically in the real world. And to have some fun along the way. I look for truth in paranormal and urban fantasy.” Last year, she wrote a post (https://truthinfantasy.com/blog/head-of-the-class/) about class and status after beta reading Smells Like Weeia Spirit. With her permission you can read it here (Thank you, Anne!). Find more thought provoking posts about Truth in Fantasy on her website.

I was privileged to be an advance reader for Elle Boca’s Smells Like Weeia Spirit. I’m delighted to report that the book is now live on Amazon and I urge everyone to read it! This is the third story in the Weeia Marshals series, and Danielle Metreaux has been the lead Marshal in Paris for a while now, keeping the superhuman race safe from each other and secret from the regular humans out there who have no idea that the Weeia exist. Danielle has risen above a difficult upbringing and a tarnished family name. She represents a twist on the traditional rags to riches tale, where she is now keeping company with people who once looked down on her socially and economically. Danni struggles to feel like she fits in, and there are plenty of those who want to keep the struggle alive, but also those who seek to include her as one of their own. As Danni navigates the stratified structure of Weeia society in Paris, she encounters different classes of people and people with different levels of class. It’s an interesting subject, class, and one we don’t discuss too often here in the New World.

Class, money, and privilege tend to be more interconnected in the United States than they are in European countries, for example. Here, one’s class is dependent less on one’s birth than on one’s ability to earn money. There are few impoverished nobles in America, and lots of successful nouveau riche social climbers. And, to add a layer of complexity to this blend of high society and hoi polloi, we can also talk about what it means to have class, not just belong to one. Because being a part of high society or the ranks of the wealthy doesn’t necessarily mean one has any actual class, just as poverty and low birth doesn’t prevent one from having loads of it.

To me, the epitome of class is one of my childhood friends. Since we were little girls, she has gone out of her way to make everyone comfortable around her. She’s used to a lifestyle and amenities most of us have never experienced. Some in her situation never see those who make her existence what it is—the housekeepers and the waiters and the support staff at every turn. Not my friend; as long as I can remember, she has been inclusive, treating those who can do nothing for her with the same respect and consideration as the CEOs of the companies with whom she deals. I have never seen her look down her patrician nose at anyone. So, while her privilege secures her spot as an upperclassman, it’s her innate class that makes her the lady she is.

On the other hand, there are lots of folks out there with money and status who consider themselves to be “upper class,” but who have no idea what it means to be “classy.” They delight in stepping on the perceived wet backs of others as they ignore those not of their “class.” Fuck that shit. In the end, people can only make us feel as uncomfortable as we let them. When someone looks down their nose at me, it says a lot more about them than about me—about their insecurities and lack of self-worth, and nothing at all about mine. I know first-hand that money buys neither happiness nor class. It can’t buy intelligence or health, although it can make these pursuits easier and more likely to succeed. It’s hard to be healthy in a food desert or without access to medical care. It’s hard to learn when the instruction is suboptimal and the students apathetic or hostile.

I’m not suggesting that money isn’t advantageous or that a pedigree doesn’t open doors. Although being the true American that I am, I don’t really understand class and pedigree, nor do I have much respect for them. Who gives a shit that one’s ancestors came over on the Mayflower?  That has nothing to do with who their descendants turn out to be. And I know there are certain clubs and groups that pull each other’s puds and circle the wagons lest the bloodlines be diluted by the great unwashed, but I’ve never understood why anyone would want to belong to those elitist institutions in the first place.

Class and social status are just a continuation of the tyranny of the so-called popular kids in school. The Queen Bees and the Wannabes. I figured out early that the best way to win that game was to refuse to play. Exit the game board and find another playground. In high school while the popular girls were being passed around within a tiny bubble of self-aggrandizing beautiful people, I was having the experience of a lifetime with an older boyfriend who introduced me to the world. Now, granted, it was a pretty twisted relationship, but dysfunction is not limited to May-December romances; I’m watching my teenaged sons and their friends doing the dance and there’s not much that’s functional there at all.

Anyhoo, back to self-defining, exclusionary groups that make themselves feel grander by trying to make others feel small. Who would want to join that club? Not me. And definitely not anyone who is comfortable with who they are and what they believe in. Of course, this is not to say that rich, privileged, pedigreed people can’t be warm, wonderful and wise, like my friend. There is nothing precluding them from being comfortable in their own skin. And when they are, they are as gracious and welcoming as anyone else who has found their place in the world. More so, in fact, if they are self-aware enough to understand their good fortune in being born into wealth and privilege, which creates opportunities that not everyone enjoys. Those folks find joy in sharing their good fortune and creating opportunities for others. They define class, in every sense of the word.

It’s good to watch Danni grow and evolve. It reminds me that I can evolve as well, particularly in the realm of being as classy as I can, irrespective of my station or financial status. In this way, we can all go to the head of the class if we so choose. 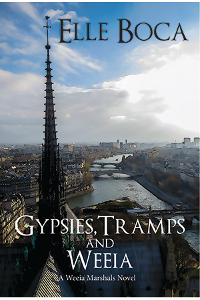 Opening Dec 6 in 17 countries, including the United States – Goodreads giveaway to win a print copy of Gypsies, Tramps and Weeia or Weeia on My Mind, books one and two of the Paris urban fantasy Marshals Series about superhumans.

Last week I announced a similar giveaway for Smells Like Weeia Spirit, book three of the same series. Now there are three giveaways, each one for a print copy. Due to changes in the Goodreads program it might be the last giveaway of this kind for a while.

Improve your chances of winning. Enter all three giveaways!

Four stars from Midwest Book Review for Weeia on My Mind

Established in 1976, the Midwest Book Review is committed to promoting literacy, library usage, and small press publishing. It featured a review of Weeia on My Mind in the March 2017 issue. With the publication’s permission below is the entire review. Our thanks to reviewer Clabe Polk and the Midwest Book Review!

When we last joined Danni Metreaux, a third level Weeia marshal assigned to Paris in Gypsies, Tramps and Weeia, she had just finished dealing with a threat from a band of Gypsies with the grudging assistance of her boss, Francois. In the course of the earlier Gypsy investigation, she met a young Weeia man named Iaen and now the beginning of a romantic relationship begins to bloom through Danni’s confusion about her job and her life in Paris.

She is beginning to feel more comfortable as she meets more people and she begins to feel a little less isolated, but only a little since Francois is more remote than ever and Madame Marmotte continues to trash her behind her back. Now, she’s faced with training a new level 1 marshal, Sebastien, whom she was neither expecting nor prepared for. Worse, he is Madame Marmotte’s nephew, has Francois’ approval and comes from an influential Parisian family. To top it off, Sebastien appears just in time to save her from getting her ass kicked by a gang of Serbian-Croatian mobsters. How embarrassing!

Despite that, they are soon deep into a case involving one of a kind art pieces apparently stolen from a private collection, and case in which a Weeia exhibiting a particularly strong gift of mental manipulation is allegedly manipulating humans to commit theft.

Like Gypsies, Tramps and Weeia, Weeia on My Mind is entertaining and the reader finds themselves rooting for Danni to overcome her challenges in Paris. There are hints about why Francois is not supportive, but his real story remains to be told. This book introduces Sebastien as Danni’s junior partner and the route through which she can begin to interact with some the Parisian elite. It likewise identifies Iaen squarely in the role of Danni’s boyfriend. Ho hum, I guess action and intrigue aren’t enough; there must be some romance somewhere I suppose.

Oh…the story? If you want to know about it, buy the book. Those who love cozy mysteries, light fantasy and intrigue with occasional intense action should love it! 4-Stars

I’m thrilled to share this upcoming book with you! I love the new cover from the cover designer for the series. It features original photos taken in France.

The manuscript should be back from beta readers this week. I hope to have an update on the publication date very soon! Watch your inbox in the coming weeks for news.

Thanks so much for supporting me and my work as a novelist!
Elle