Reader shares her thoughts about winning centered on Gypsies, Tramps and Weeia

Everyone’s A Winner
by Anne Marvin

I’ve just started digging into Elle Boca’s latest Weeia novel, Gypsies, Tramps and Weeia. Fortunately for readers everywhere, this series is getting better with each installment. This most recent offering starts with a bang and hasn’t let up. Anyway, the bang that opens this novel got me thinking–and you know what that means!

As the book begins, Danni, our kick-ass protagonist, is preparing to take her field exam to progress to the next level as a Weeia Marshall. As we learn later, Danni has her share of detractors who don’t believe that she belongs at the Academy. In fact, her unpopularity with certain factions has led someone to play a cruel prank, sending a note saying the exam had been pushed back by two hours. Luckily, Danni has some good friends among the student body (and the faculty, as it turns out), and she arrives to the exam late, but nonetheless able to pass with flying colors. Her victory is clouded, however, by the malevolence of her peers and the desire of some to succeed based on her failure. For this faction – you know the type, they exist in truth as well as fantasy – someone has to lose in order for someone else to win. 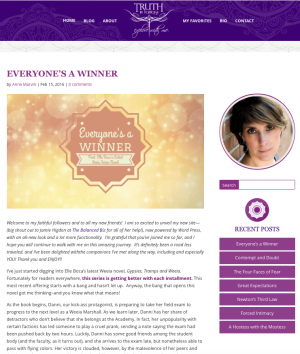 I take issue with this zero sum view of winning, as does Elle Boca, if the characters she writes are any reflection of her life philosophy (which I believe they are, as I’ve written before). And I’ve been thinking about these very concepts since I just saw a great quote on Twitter that said, “I don’t believe in competition. I want us all to win.”

Before I get a slew of irate comments and emails about the fallacy of giving all participants participation awards and the annihilation of merit-based promotion, not to mention the equality of everyone, let me say I hear you and I don’t necessarily disagree. It’s foolish and delusional to insist that there are no such things as winners and losers in this world, Little League trophies for showing up to the contrary. But that isn’t what I’m talking about. Clearly, we can’t all win at everything.

What we’re talking about here is the ugly underbelly of competition, the one Ms. Boca illuminates with the fraudulent note intended to ensure Danni failed her test, leaving more slots and better assignments for others. That kind of competitiveness depends on the fallacy of insufficiency–that there is not enough–of anything–to go around. Of course, there are a limited number of Americans who will be our nation’s President, and as each election cycle teaches us, many who want the job. And, as we know from 50 years of Super Bowl games, not every team’s members will get one of those coveted rings, which always makes me a little sad, as they seem to mean so much to those folks. And as I watched my family and friends watching the Super Bowl, they were focused on the winners and their platitudes (“I’m just grateful to have played; I couldn’t have done it without my teammates,” do these guys read off the same script?!), while my eyes were on the team that didn’t win and feeling sorry for their loss.

One of my favorite museums in Washington, DC, is called the Newseum, a museum of news. They have a gallery where all of the Pulitzer Prize winning photographs ever taken are displayed. They are all arresting, but one that particularly caught my eye was a photo of the 1992 Nigerian women’s track and field team, after the 4×100 meter race. While all the other photographers were training their lenses on the winning American team, one photographer captured the moment when the Nigerian women realized they had won the bronze–third place–medal. Their incandescent happiness was infectious and the photo is a joy to behold. No losers there.

When I was in graduate school, I studied for my PhD comprehensive exams with two fellow students. The experience of studying together created an incredible bond, despite the fierce competition between us. In the end, when the exams were graded, each of us had passed, which was a relief, but on top of that, each of us had “won” in a way: one of us had the highest scores on an individual question; one had the highest score from the first reader; while the last of us received the highest score from the second reader. We all had a claim to fame, and it made the shared success that much sweeter.

That’s what I want, for everyone to win. In Elle Boca’s book, Danni has a similar attitude, and she’s dismayed when others don’t share her generous view of the world. I feel her pain. Why can’t we all be happy for each other’s wins, big and small? Why does someone need to lose for someone else to win? Does it count if we win on the backs of our fellows? Not to me. I want the world to celebrate my successes, as I celebrate everyone else’s. And yes, I will take off my rose-colored glasses very soon. But the world is so lovely when it’s blushing. Just ask Danni.

*This article was first published on Anne Marvin’s website. She graciously allowed us to share it here. Congratulations to her on the revamped look of Truth In Fantasy. To read the original and more of her articles visit her website at http://www.truthinfantasy.com/blog/everyonesawinner/