A reader’s perspective about doing good without ulterior motives

Anne from Truthinfantasy.com wrote an insightful and thought provoking post about, well, rather than tell you about it here it is for you to read it (with Anne’s permission, thank you, Anne!): 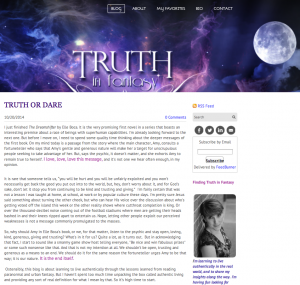 I just finished The Dreamshifter by Elle Boca. It is the very promising first novel in a series that boasts an interesting premise about a race of beings with superhuman capabilities. I’m already looking forward to the next one. But before I move on, I need to spend some quality time thinking about the deeper messages of the first book. On my mind today is a passage from the story where the main character, Amy, consults a fortuneteller who says that Amy’s gentle and generous nature will make her a target for unscrupulous people seeking to take advantage of her. But, says the psychic, it doesn’t matter, and she exhorts Amy to remain true to herself. I love, love, love this message, and it’s not one we hear often enough, in my opinion.

It is rare that someone tells us, “you will be hurt and you will be unfairly exploited and you won’t necessarily get back the good you put out into to the world, but, hey, don’t worry about it, and for God’s sake, don’t let it stop you from continuing to be kind and trusting and giving.” I’m fairly certain that was not a lesson I was taught at home, at school, at work or by popular culture these days. I’m pretty sure Jesus said something about turning the other cheek, but who can hear His voice over the discussion about who’s getting voted off the island this week or the other reality shows where cutthroat completion is king. Or over the thousand-decibel noise coming out of the football stadiums where men are getting their heads bashed in and their knees ripped apart to entertain us. Nope, letting other people exploit our perceived weaknesses is not a message commonly promulgated to the masses.

So, why should Amy in Elle Boca’s book, or we, for that matter, listen to the psychic and stay open, loving, kind, generous, giving and trusting? What’s in it for us? Quite a lot, as it turns out. But in acknowledging that fact, I start to sound like a smarmy game show host telling everyone, “Be nice and win fabulous prizes” or some such nonsense like that. And that is not my intention at all. We shouldn’t be open, trusting and generous as a means to an end. We should do it for the same reason the fortuneteller urges Amy to be that way; it is our nature. It is the end itself.

Ostensibly, this blog is about learning to live authentically through the lessons learned from reading paranormal and urban fantasy. But I haven’t spent too much time unpacking the box called authentic living and providing any sort of real definition for what I mean by that. So it’s high time to start.

In my world, we are all good, and generous and kind and loving. That is the true nature of all humans. Sometimes, we cover that up with all manner of garbage and we become who we are not, selfish and stingy and mean. But I don’t believe we begin that way. We begin with the trust of the innocent and the rest of the nastiness is just learned behavior. And no, I’m not naive. I understand that evil exists and that some poor unfortunates can’t help being “wrong” somehow or being a bad seed, and some of them are born that way. But those sad souls are damaged, not built according to the blueprint. And some of us, of course, choose a path of impairment and disease. But again, that is not who we are or who we were meant to be.

Like Amy in The Dreamshifter, it is our nature to be giving and trusting. And it is the task of a lifetime to nurture that fragile flame and keep it burning against the strong winds of the world that would extinguish it.

It is so easy to give up on love and trust when we’ve been betrayed. It is so easy to extrapolate from the few to the many and decide that it is best to mount a good offense as an effective defensive strategy. Once we’ve been exploited, how easy is it to lash out at the world and strike first before anyone can hurt us? Or lock up our hearts to be sure that they never get stomped again. Too easy.

And that would be a mistake. Because being open, giving, trusting and loving is an end in itself. Its own reward, in essence. It just feels good to give, at least to me. I have always loved giving gifts and support and empowering people to be their best. And sometimes, my inclination toward generosity had resulted in my getting very, very burned. Betrayed. Made a fool of. It has definitely happened. And it does not feel good at all. And for a time, hopefully not too long, I might entertain fantasies of revenge and self defense. I might contemplate building a wall around my heart or around my wallet, depending on the nature of the betrayal.

But in the end, I’ve always decided against it. Revenge is bad for the soul. Getting back at someone hurts me a lot more than it hurts them. Retribution corrodes the heart and dulls the zest for life. No thank you, not for me.

Because, like Amy in The Dreamshifter, it is my nature to be open, loving, generous, kind, giving and trusting. Because, unlike Amy, I’m human. And that’s how we roll.