Today, JP Schaper of Books That Hook, published the most recent review of Unelmoija: The Dreamshifter.  With her permission, here is a copy: 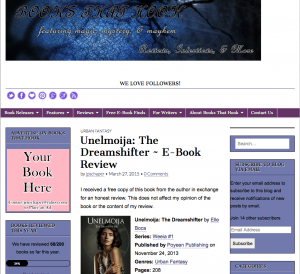 Unelmoija: The Dreamshifter is the first novel in the Weeia series by Elle Boca. It’s a short book, 208 pages, so it’s a quick read. The basic storyline is that Amy is a dreamshifter who doesn’t know much about her ability or her kind, the Weeia. She is approached by a man who gives her shocking news. Then, she meets another man, Duncan, who becomes her friend. Both men help her throughout the book, since someone keeps trying to kill her. I know that’s really vague, but I’m trying not to give too much away.

This book is appropriate for young and new adults. The main character is eighteen years old. There is no romance in this book.

Overall, I enjoyed reading the story. I liked the brisk pace and the world-building.

There were some problems I noted, however. The first thing I noticed was how Amy describes herself using a mirror at the beginning of the book. This is an overused literary device. I think there could have been a better way to let the reader know how she looks. Second, I noticed some spelling and punctuation errors. For example, Sara is sometimes spelled Sarah and sometimes Sara. The third problem I noted was that a lot of the book was spent detailing what was being eaten at every meal. There was too much about food. Fourth, I felt like this wasn’t the first book, even though it was. There was a lot of stuff that went on prior to this book starting that I think could have been written first.

Those issues weren’t that big of a deal. I still think this is a well-written book that a lot of paranormal/urban fantasy readers would enjoy.