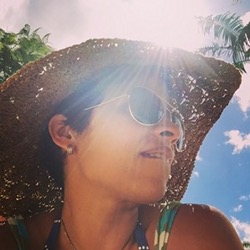 What starts as a normal morning for young Amy as she heads out for a run along the Miami waterfront takes an unusual turn when she crosses paths with two men – the father she never knew, Thomas McKnight, and a stranger who both repels and attracts her, Duncan Bittersdorp – and her life is forever changed.

Armed with the knowledge she is Weeia, a superhuman race, and is able to dreamshift, a rare power among her people, Amy suddenly finds herself on the run, hoping to survive whoever and whatever is trying to track and kill her father.

Assisted by Duncan, another Weeia with vast knowledge of the dealings of her father, the two embark on a fast-paced, thrilling journey through the streets, cafes, and estates of Miami, doing their best to keep Amy alive and ahead of whatever danger is lurking around the next corner.

Boca does a great job of character-development and world-building in this introduction to the Weeia, and she lovingly captures life in Miami so intimately that you come away feeling as if the city itself is one of the living, breathing characters in her novel.

While reading Dreamshifter, I figured most readers focus their attention on Amy and Duncan, as they are the center of the action. They are sweet and I thoroughly enjoy their interactions and the energy between them, it’s very natural flow, but they don’t compare to Amy’s father, Thomas McKnight. For me, he was the real intrigue. He’s mysterious, powerful, something about him is rather sinister and honestly, I cannot wait to get more of him in the next books in the series. Interestingly, I’m not certain Amy will be sharing my sentiments.

Boca asks readers if they’re ready for a new kind of fantasy and if your answer is yes, then waste no time and snatch up a copy of Dreamshifter.