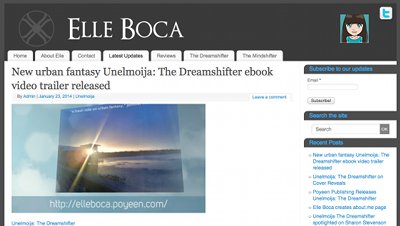 Boca Raton, FL, January 29, 2014 – A 30-second promotional video for Unelmoija: The Dreamshifter (Poyeen Publishing, ebook $4.99), an urban fantasy ebook by South Florida author Elle Boca, was released. In the recently released ebook, Boca taps into a world within our world to reveal extraordinary beings in a new urban fantasy series set in Miami, Florida. The first book in the series is available online via Amazon Kindle. The video may be seen at the author’s landing page (https://elleboca.poyeen.com/latest-updates/), at Animoto.com (http://animoto.com/play/8XDYI1Pama1H8FGI1aZC3g), and on YouTube (http://www.youtube.com/watch?v=fmmrxo8LbWQ).

A pretty yet ordinary young woman’s life is transformed when a traumatic incident changes her forever. She has an unexpected encounter with the father she never knew. She meets a young man that repels and attracts her at the same time. Soon she realizes she’s not who she thinks she is. Amy, unassuming and intelligent, with newly acquired superhuman skills, lives in a historic Miami waterfront estate. What she never imagined was that a secure location, youth and superhuman abilities may not be enough to protect her from whoever wants her dead.

Unelmoija: The Dreamshifter follows Amy’s journey of self discovery among the Weeia, superhumans like her who live long lives amid humans. Although at first glance, Amy’s life seems idyllic and full of promise her life is in danger. Amy seeks refuge and guidance from friends only to discover things are not as they appear. She must rely on her bravely and become self sufficient to save herself and her now ailing mother.

This is the first book in a fun, mysterious, and adventurous new series from a South Florida author who reveals an incredible story of what humans might become. It is sure to inspire young adult and adult readers. For the latest updates, visit https://elleboca.poyeen.com/latest-updates/

Elle Boca began reading at an early age but it was only recently that she explored a new found passion for writing. Since completing the creation of the world of the Weeia and writing the first book, Unelmoija: The Dreamshifter, she has written the second novel in the series. The author, who writes under a pen name, lives with her husband in South Florida. https://elleboca.poyeen.com

Note to editors: Review copies and images are available.